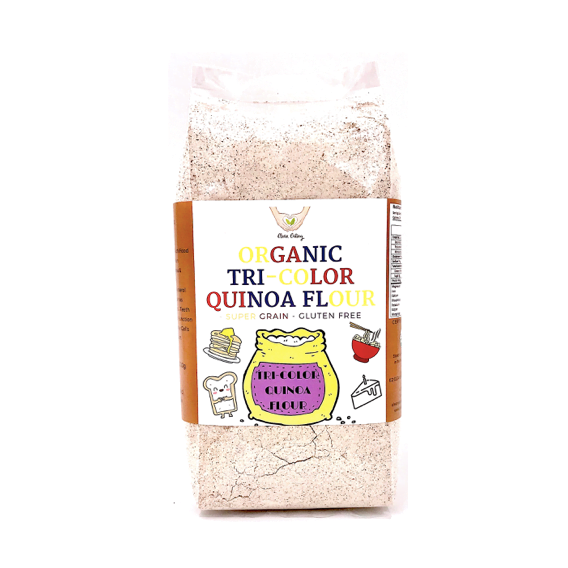 Organic Tricolor Quinoa Flour is one of the most nutritious grain flour available. This nutrient-rich grain is a wonderful source of complete protein, providing all of the essential amino acids. This powerful little grain is a great addition to any diet, but is an ideal solution for those following a gluten free, vegan or vegetarian diet. This flour is also an excellent choice for those looking for a more healthful twist on standard baked goods and pan-fried favorites such as breads, pancakes and waffles. You can substitute this flour for half of the all-purpose flour in many recipes, or completely replace wheat flour in cakes and cookie recipes. Quinoa flour imparts its unique, nutty yet earthy flavor to your favorite baked goods. It pairs well with fruits, nuts, spices like cinnamon, cardamom, cumin and coriander, as well as herbs like rosemary.

To Become our Dealer/Distributor, please contact us at marketing@cleaneating.com.my

Quinoa was a staple food for the South American Indians living in the high altitudes of the Andes Mountains and was recognized for its superior nutritional qualities. It was dubbed “mother of all grains” by the Incas and had spiritual significance for them. Many traditions and ceremonies surrounded the cultivation, harvest and consumption of quinoa. Widespread exposure to the grain has led the rest of the world to come up with a number of quinoa-derived products, including cereal and flour.

It’s good to know just how versatile quinoa flour is. It creates a soft baked good but is also wonderful for making bread and is a fantastic all-purpose type of flour.

Quinoa flour is especially great for baking gluten-free bread because of its protein content. Since gluten is a protein, it is important to use higher protein flours (such as quinoa) when baking gluten-free. The protein in quinoa flour helps to give your bread some structure, and will improve the overall texture.

For best flavor, try toasting your quinoa flour before using it: Spread it out onto baking sheets covered in foil or parchment paper, and bake at 215 degrees for 2 ½ – 3 hours. You’ll know the flour is ready when its scent is nearly gone and the flour has a mild flavor. Once it’s been toasted, your quinoa flour should keep well in the fridge or freezer for about 8 months.

Even after toasting, quinoa flour does have a very slight sour flavor – which lends itself beautifully to things like bread and English muffins.

There are no reviews yet.